skip to main | skip to sidebar

Yeah, but will it last?

So some people have been saying that the dye I use sucks and scratches really easy, weakens the plastic, etc.

I was plenty concerned about this myself, but I blew through $80 worth of wired controllers finding the best way to change the color of these things so I present you with the following:

I completed this project Tuesday night, its now Thursday night, a little more than 48 hours later.

I JUST took this video.

For the record this was the third video I took, each scratching the same spot, I was trying to get a clip you could see as clearly as possible, so I scratched it hard three times.

And this is a picture of that spot on the controller afterwards (and you can see in the video that my thumbnail is kinda bending at the end there, I put a lot of pressure on it!): 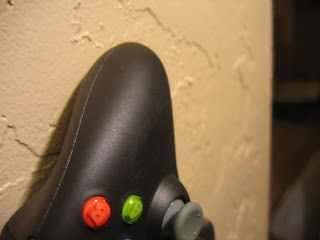 And this is a picture of the same spot, moment later, after a damp sponge and drying it off with a paper towel. 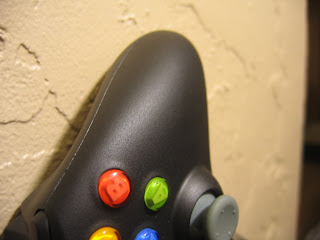 The only way I have been able to scratch this is by using a flat blade screw driver and just flat out intentionally scratching it, which would have DEFINITELY scratched the original.

I have NOT been able to damage it with just my bare hands, I can literally grab it and claw at it as hard as I physically can and nothing happens.

If you shake the can, and do everything properly, aside from intentionally trying to do it harm...I dunno.
Posted by Alcaron at 8:16 PM

well, maybe people were using the wrong kind of dye.

This is what I used.

The Krylon Fusion for plastic. Got it at Advance Auto Parts for 5 bucks. Even though it has been only 4 hour sense it's been done, it does feel kinda cheap. Sorta like spray paint where it just comes off if you use a finger nail.. which i tried(remember, only been 4 hours done) and a little did come off... I dont know. It does look good in my opinion.

The real test will be the inner rim of the stick wells. I know I grind the hell out of them, that's gotta be the most intense area of wear on the controller.

Great job all things considered. Looks so much better than white!

I know there are black 3rd party 360 controllers. But I wonder why MS doesn't put out one of theirs in black, at least a wired one if nothing else?

i was wondering if there was any metallic colors? and where to get it?

Yeah, about the guy that said he could peel it off with his finger....

# The parts will be vulnerable to damage until they cure. You can literally take your fingernail and scoop soft plastic right off the surface just after you spray them. So BE CAREFUL!

I can not comment on your method as i have not tried it (assuming you stile use the 2006 explanation which was all i saw ).
but i recently dyed my controllers orange it was a 5 min process each controller including dismantling i did not do the triggers though

Basicly i took RIT fabric dye in boiling water and dropped the empty shell into it for 2 minutes then ran it under cold water to get excess dye off.. the only thing you have to worry about it warping the controller as you are dipping it in boiling water.. the first controller i did this and the LB and RB dont line up perfect so they are not 100% but still usable the second controller i solved this problem by screwing the top onto the bottom and dying them together .. thought i would let you know what method i tried as RIT has a large selection of colors and a color chart online showing what colors to mix at what percentages to get desired colors

Thanks for sharing and reading enjoy your modding !

RIT dye works, but it's very dangerous. You can try different methods, like a lower temp for the water with multiple dips to increase the color. But ultimately it's still risky. Which is why I opted for the vinyl dye, it's a lot safer (lol not chemically speaking of course).

Yeah the first problem was my fault and was solved by screwing the 2 shells together before dipping them... i am curios though what else do you consider unsafe about RIT ? as you suggested multiple dips and a lower temp would be effective

Well, the main thing isn't that it's impossible, it's just I'm a little leary of telling people "try this!" on a blog in case something goes wrong, I just don't want it coming back on me, hence I put forth the "safer" (from the damage to components standpoint) method of duplicolor.

As for RIT dye, melting is the problem. Multiple dips can BE safer, but it's also less likely to give you the right color, you have to keep dipping to get the desired effect. And each dip you run the risk of it being in too long and warping.

It's also more about "feel" than something you can explicitly instruct someone to do. Getting an even color depends on not only how long you have it in the dye but also the size of the pot you boil the dye in, and theres no easy way to tell someone how to bring water just under boil as most people wont even come close to boiling, or they will still hit boiling point (lol you'd be amazed how many varying opinions there are on what exactly is a boiling pot of water haha).

So it's not impossible, and if you want a largely fool-proof method for dying them with RIT dye, honestly the best method is to have something FIRMLY reinforcing the shape of the controllers. best example i can give is a modeling clay. You basically just mash it into the empty body before you screw it together screw it back together. You want it just full enough for it to keep shape, if there's too much pressure it will bulge out the plastic most likely when you dip it.

Of course then you have to make sure any clay that was extruded doesn't cover any inner lip you want dyed, etc. etc.